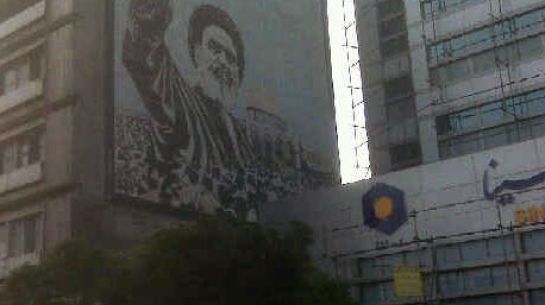 My Iranian visa came very late, so the others – this is a visit by a group of UK curators – had been here for 3 days by the time I arrived in Tehran. In the two days I’ve had with them, we have visited a number of small galleries and artists’ studios, and attended artists’ gatherings and a couple of openings. Tehran is vast and teeming, and the traffic insane, so we seem to be late for everything. Legendary Iranian hospitality shows in the warm welcomes we receive from artists and curators to their homes and studios. The realisation that many such encounters break at least two or three laws highlights the contradictions of modern Iran and the dramatic contrast between public and private space. Of course, for Iranians this is just one of the many stresses of life here.

Additional stress for the artistic community is the new legislation that requires every exhibition (and every single artwork) for public display to be pre-approved by the Ministry of Culture. If an artwork is barred, the artist is summoned to explain their work. If summoned 2 or 3 times, the artist can be permanently banned from exhibiting their work. Artworks for international shows and export also need Ministry approval. One gallery owner mentioned taking work rolled up in tubes in personal luggage, but this is becoming more risky. If an Iranian artist does get unapproved work out or makes the work abroad, representatives from the consulate in that country will often go to see the work. We were told that a couple of artists in the current Saatchi show will need to remain abroad for some time.

Consequently, a lot of the art we have seen has been underground. The spirit of dissent is certainly alive here in the Tehran artists’ community. Some artists are explicitly subversive, but even a lot of the shown and approved work is highly coded, masking its criticality. Interpretation and text are conspicuously lacking, and artists will only “own up” to any critical intent in private.

We had dinner one night at the home of B, who screened his new documentary film ‘Sculptures of Iran’, an extraordinary tale of public sculpture in modern Iran. One story followed the fate of a large abstract figurative sculpture removed from display. The museum director interviewed claimed it had suffered accidental damage being moved. The film the cut to a museum employee (somehow they gained access to the collection now kept in the vaults) unwrapping this sculpture and showing the complete removal of the arms, which would clearly have taken a tool that can cut through inch-thick metal. By contrast, the film also followed the story of a regime-commissioned frieze, a large and hideous public artwork, knocked down to build a metro station, and the poignant anguish of the sculptor as he attempted to find out what had become of it. It was a complex film, full of insight, contradictions, humour and lies, about the profound loss of cultural understanding in the modern Iranian state.

We ended our first two days giving individual presentations of our work to a large gathering of artists at a gallery in central Tehran.